Functionally rare species can support unique functions for ecosystems. Moreover, identifying the distribution and drivers of functional rarity across space and time is of tremendous importance for conservation ecology. However, functional rarity remains an overlooked facet of functional diversity. We used a worldwide coral reef fish database comprising 2073 species occurrences in 259 locations with complete information for 6 traits related to major ecological functions as well as a phylogenetic tree of all those species. Functional Rarity is defined as the originality of a species given its neighbor in a community. For each species we computed functional rarity, evolutionary distinctiveness and geographic range indices. We found that evolutionary distinctiveness of a species does not correlate with functional rarity. Species restrictedness in space and functional distinctiveness let us classify species in different categories: functionally rare or common & geographically restricted or widespread at a global scale. Our results show that the originality of a species by its traits cannot be estimated from its position in a phylogenetic tree. Our work also underlines the lack of IUCN assessments for functionally rare species. It could be used to prioritize species for which an assessment should be made. 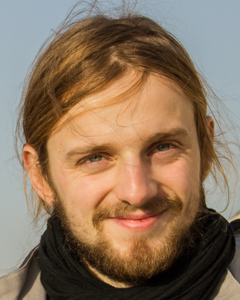